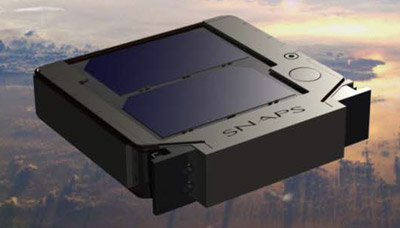 SNAPS (Stanford Nano Picture Satellite) is a nanosatellite built by Stanford (SSDL), which is intended to image other CubeSats autonomously using H264 compression.

This spacecraft has dimensions of 25 × 113 × 113 mm (0.25U CubeSat form factor), has a mass of less than 0.5 kg, which allows it to be placed into a Containerized Satellite Dispenser (CSD) besides a 3U-Cubesat. It sports a 1080p camera, 32-bit ARM microcontroller with SRAM and FRAM, UHF radio and non-deploying antenna, non-deploying solar array, and ~20 Wh of lithium-ion battery capacity.

It was planned for the maiden Falcon-9 v1.1(ex) launch from Vandenberg AFB in April 2013 together with several other satellites, sharing a deployer with POPACS, but was eventually not launched on this mission. Later a launch in 2014 on the maiden Super Strypi was planned, but again did not take place. It was eventually launched in late 2015 towards the ISS on the Cygnus CRS-4 mission, to be deployed from there later in 2016. It was deployed mounted on the SIMPL satellite. It was not deployed from SIMPL, but it is unclear, if it stayed attached intentionally.