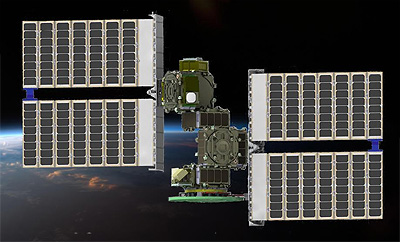 SIMPL (Satlet Initial-Mission Proofs and Lessons), also known as HISat (Hyper Integrated Satellite), is mission to demonstrate the satlets technology. It is developed by NovaWurks, in collaboration with NanoRacks MicroSat.

SIMPL is a modular, Hyper Integrated Satellite (HISat) designed to provide complete satellite functionality in a nanosatellite scale. It is the first flight experiment of a satellite based on cellular architecture where the satellite or PAC (Package of Aggregated Cells) is composed of identical building blocks called satlets. This mission is composed of six satlets and two solar arrays, which wil be assembled by astronats on board of the ISS before being deployed.

As an additional payload, SIMPL carries the QIKcom 1 amateur communications payload for the US Naval Academy Satellite Lab, containing an APRS packet radio communications transponders for relaying remote telemetry, sensor and user data from remote users and amateur radio environmental experiments or other data sources back to Amateur Radio experimenters via a global network of internet linked volunteer ground stations.

Also it carried the SNAPS 0.25U Cubesat. It was not deployed from SIMPL, but it is unclear, if it stayed attached intentionally.

The satellite was launched onboard the Cygnus CRS-4 resupply craft to the International Space Station (ISS). It will be the first NanoRacks microsatellite deployed from ISS and the first propulsion-capable satellite deployed from NanoRacks-MicroSat-Deployer (Kaber). This is a commercial deployer system aimed at addressing the growing market of customers wanting to deploy microsatellites in orbit. The deployment of SIMPL has been delayed by problems over radio licensing.

SIMPL was assembled in October 2017 on the ISS and was eventually deployed on 27 October 2017.