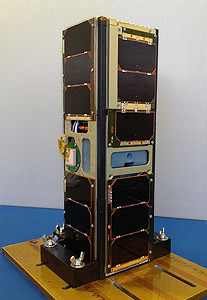 LONESTAR is a collaborative project between the University of Texas at Austin, NASAs Johnson Space Center, and Texas A&M University. The project is a series of missions with each university contributing one satellite per mission, leading to an autonomous rendezvous and docking (AR&D) demonstration in the final mission. LONESTAR-2 is the second mission in the series.

The goal of this mission is to launch two satellites together that will separate in orbit and perform proximity operations, including taking pictures of each other. UT-Austins satellite is known as Bevo-2. Bevo-2 is a 3-unit CubeSat that will be deployed from the Texas A&M AggieSat-4 satellite, an ~50 kg nanosatellite.

LONESTAR-2 is scheduled for flight in early 2016. Bevo-2 features a number of innovative CubeSat technologies, including an integrated 3-axis attitude determination and control system, a cold-gas propulsive thruster, and a multi-purpose camera that will be used both for star tracking and imaging.

AggieSat-4, containing Bevo-2, was deployed on 29 January 2016 via the Space Station Integrated Kinetic Launcher for Orbital Payload Systems (SSIKLOPS). Aggiesat-4 was to eject Bevo-2 later for joint operations, but it was ejected prematurely shortely after deployment from the ISS and was apparently not activated.