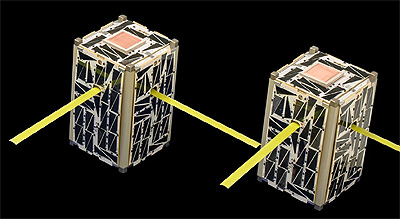 NASA's Nodes (Network & Operation Demonstration Satellite) is a mission to demonstrate new network capabilities critical to the operation of swarms of multiple spacecraft. The mission is a bonus mission in the Edison program.

The Nodes mission consists of two 1.5-unit CubeSat nanosatellites each weighing approximately 2 kilograms and measuring 10 centimeters by 10 centimeters by 17 centimeters. The Nodes spacecraft are derived from the hardware and software developed for the EDSN mission (a swarm of eight spacecraft). The satellites are mostly identical to the EDSN satellites, but with minor modifications for ISS deployment and an upgraded software. Each Node utilizes the Android operating system with EDSN-specific software programmed to perform command and data handling tasks that allow the satellites to:

Nodes was originally planned for launch to the ISS in October 2014 on the ill-fated Cygnus Orb-3 mission, but was delayed. The two satellites were launched in December 2015 onboard of Cygnus Orb-4 to the ISS, were they were deployed into orbit on 16 May 2016. The Nodes mission duration is approximately two weeks with orbital life reaching six months.