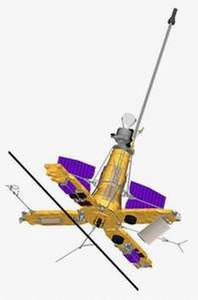 The Sich 1M is a multipurpose Earth remote sensing satellite, an improved version of the Sich 1. It is built under the National Space Program. The planned launch in 2004.

The satellite is intended to acquire the information concurrently in visible, IR and microwave ranges. A set of scientific equipment installed on Sich-1M satellite board allows to solve a number of practical and research problems related to study of atmosphere and World Ocean, monitoring of hydrological and ice conditions, vegetation and soils etc.

The Sich-1M satellite is built on the structural platform of Sich-1 satellite and Okean-O1 satellites series but by its instrumentation, this will be a more sophisticated spacecraft:

The Sich-1M satellite has sufficiently high information capabilities both by the composition and characteristics of its research equipment and (which is more important) by the possibility of wide and operative user's access to data. The satellite launch will allow to demonstrate the potential and advantages of integrated research during interaction of NOAA + Meteor + Sich-1M systems which opens up the prospects of creating a highly effective system of several satellites for continuous meteorological and oceanological investigations.

A wide spectrum of onboard radio lines in 137 MHz, 1.7 GHz, and 8.2 GHz bands will allow to receive a satellite signal by practically all existing receiving stations on all continents (more than 1000 stations of 137 MHz channel, wore than 200 - 1.7 GHz, and more than 30 - 8.2 GHz) and directly by the user's autonomous receiving terminals.

One of the tasks of Sich-1M satellite launch is the support of Variant experiment - investigation of earthquake precursors. The planned Sich-1M satellite launch will take place at the same time with DEMETER French microsatellite launch which main scientific task is the monitoring of active seismic phenomena in ionosphere. The concurrent observations at two points of space will create fundamentally new favorable conditions to set new tasks and to increase authenticity of the results of experiment. Within the scientific program of DEMETER and Sich-1M satellite, the coordinated ground experiments and remote sensing experiments will be performed which will be coordinated by their time with the TIMED satellite and ground support means operation schedule.

The launch apparently was a partial failure, when the third stage of the Tsiklon-3 launch vehicle failed to circularize the orbit.