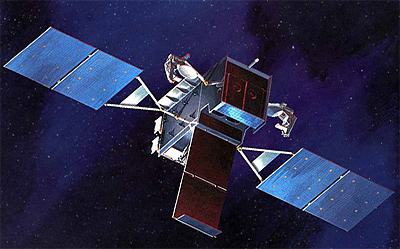 SBIRS-GEO (Space Based Infra Red Sensor - Geostationary) is the geostationary component of the SBIRS-High program, which will replace the DSP system of early warning satellites in providing early warning for Intercontinental Ballistic Missile launches.

The SBIRS sensors are designed to provide greater flexibility and sensitivity than DSP and can detect short-wave and expanded mid-wave infrared signals allowing the system to perform a broader set of missions. These enhanced capabilities will result in improved prediction accuracy for global strategic and tactical warfighters.

The SBIRS-GEO spacecraft is a 3-axis stabilized A2100M platform with a Overhead Persistent Infrared (OPIR) scanning sensor and a staring sensor. Sensor pointing is accomplished with pointing mirrors within the telescopes. The GEO scanning sensor will provide a shorter revisit time than DSP over its full field of view, while the staring sensor will be used for step-stare or dedicated stare operations over smaller areas.

On Oct. 3, 1996, the SBIRS High program received approval from the Secretary of Defense for Acquisition and Technology, Dr Paul Kaminski. The SBIRS High Component element, featuring a mix of Geosynchronous Earth Orbit (SBIRS-GEO) satellites, Highly Elliptical Earth Orbit (SBIRS-HEO) payloads on other satellites, and a new consolidated Ground Processing station, will incrementally replace the existing DSP infrastructure over the FY99 - FY03 time frame. This element is the first of two planned elements which will provide an enhanced follow-on capability to the current DSP system. The second element, commonly known as the Low Component, has been designated as a Major Defense Acquisition Program but is being developed as an integral part of the overall SBIRS “System of Systems” development concept.

The EMD contract for SBIRS High was awarded to Lockheed Martin Missiles & Space as the prime contractor on 8 Nov 1996. Lockheed's team-members include Aerojet and Lockheed Martin Federal Systems to provide satellite control, mission data processing and telemetry and tracking and operations, Northrop Grumman to provide primary infrared sensor payload and Honeywell for on-board data processing. This contract value is $1.8B for High Component work spanning the next 10 years.

In late 2005, the SBIRS-High program has been curtailed to no more than three satellites due to skyrocketing costs, but this decision was reversed later, as there was no viable alternative to SBIRS-GEO. In June 2009 the third satellite was ordered. In January 2011, GEO-4 was ordered along with long lead items for GEO-5.

The launch order of SBIRS-GEO SV3 and SV4 was switched to optimize the storage and transport costs. GEO SV3 was put into storage for a 2018 launch, while GEO SV4 was launched in 2017 directly after having been finished.