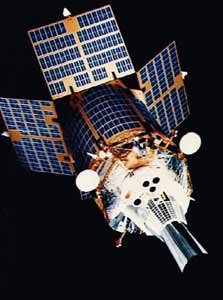 The DSP (Defense Support Program) Block-3 (a.k.a DSP-I) satellites are the third generation of DSP early warning satellites, which cost about $ 180M per spacecraft.

The Spacecraft spins slowly (6 rpm) about the nadir axis to permit scanning of the Earth by the detector system. Zero momentum (three axis) stabilized using a reaction wheel to counter the spacecraft spin. Four solar panels deploy to generate roughly 1300 W. The DSP are radiation hardened. The payload is classified, but is probably a telescope with 6000 element IR array, nuclear explosion detectors, particle detection monitors.

DSP 23 failed less then a year after launch and was inspected by the MITEx A and MITEx B satellites in orbit.

DSP 16 was retired in 2016 and was moved into a graveyard orbit above the geostationary belt.