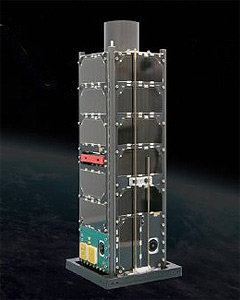 For amateur radio service, the satellite can transmit a presence signal (beacon) in Morse code format and AX format in the format of AX.25 AFSK1200. Beacon frequencies: 435665 kHz, 435765 kHz. Additionally, each of the two on-board radio transmitters can be switched to the CM mode of the 145 MHz-435 MHz transmitter, allowing radio amateurs to broadcast for thousands of kilometers.