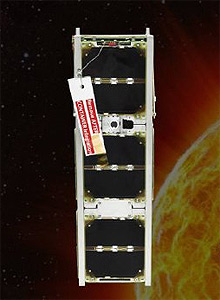 Monitor 1 is a Russian 3U CubeSats by MGU (Moscow) to detect radiation from solar flares.

The Combined radiation detector (KODIZ) has the objective to detect the appearance of radiation-hazardous proton fluxes from solar flares in near-Earth space.

In the future, KODIZ will be able to help avoid additional radiation loads on board aircraft by timely fixing the flow of particles of solar cosmic rays.

The spacecraft was developed within the framework of the SPACE-p project with the support of FASIE, students and scientists of the D. V. Skobeltsyn Research Institute of Nuclear Physics of Moscow State University (NIIYAF MSU) on the OrbiCraft-Pro SXC3 satellite CubeSat platform of SPUTNIX (part of the Sitronics Group).