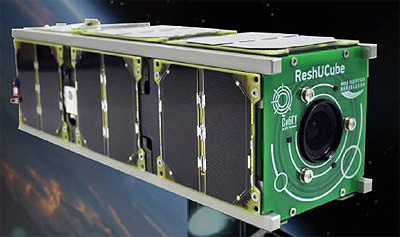 ReshUCube is a Russian 3U CubeSats developed by the Reshetnev University.

A reconfigurable space laboratory in a CubeSat ReshUCube-1 has been created by the staff of the Reshetnev University (SibSU named after M.F. Reshetnev) and school students.

The laboratory is equipped with a wide range of sensors for conducting experiments on various subjects.

The lab equipment allows to:

The ReshUCube-1 spacecraft is based on the OrbiCraft-Pro SXC3 satellite platform of SPUTNIX (part of the Sitronics Group). The satellite was developed within the framework of the "Space-p" project with the support of the FASIE.

The experimental program can be modified directly inflight: pupils and students will be able to carry out their own space experiments based on the equipment of the space laboratory. Instead of having several predefined tests, students can implement dozens of studies. The idea of the experiment, after working on it, turns into an programming script that is sent on board the ReshUCube-1 through a mission control center. Then, an experiment is conducted, and the participants receive data from space to make their small scientific discovery.