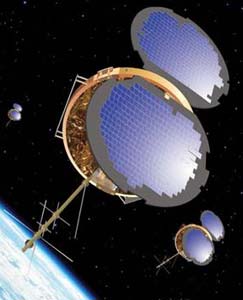 In early 2001, the National Space Program Office (NSPO) of Taiwan, Republic of China, selected Orbital for a $56 million contract for the ROCSAT-3/COSMIC (Republic of China Satellite / Constellation Observing System for Meteorology, Ionosphere and Climate) program. ROCSAT was renamed FORMOSAT in December 2004.

The FORMOSAT-3/COSMIC program is an international collaboration between Taiwan and the United States that will use a constellation of six remote sensing microsatellites to collect atmospheric data for weather prediction and for ionosphere, climate and gravity research. Data from the satellites will be made freely available to the international scientific community in near real-time.

Orbital will be responsible for constellation design and analysis, development of the spacecraft bus, payload instrument development and oversight of components made by Taiwan local vendors. Orbital will also provide assistance with system integration, satellite integration and testing in Taiwan, early in-orbit checkout, satellite positioning and mission operations. The project builds on the Orbital-built and launched OrbView-1 satellite, which was deployed in 1995 and still operates today (2003).

The satellites were retired in April 2020.