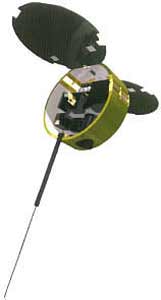 The OTD sensor maps atmospheric lighting strikes and has provided NASA with information important to the understanding of severe weather patterns. The GPS/MET sensor has proven that the signals from the GPS satellite constellation used for precision navigation can also be used to provide important atmospheric data. The success of the GPS/MET sensor has further validated the concept of using space-based sensors to improve worldwide weather prediction.

The OrbView-1 program is the result of a unique government-industry partnership between ORBIMAGE and NASA. Under this arrangement, NASA provided the OTD sensor for use on OrbView-1 and ORBIMAGE agreed to conduct an initial six-month experiment of the sensor. NASA's cost for data under this program over the past five years has totaled approximately $7.2 million.