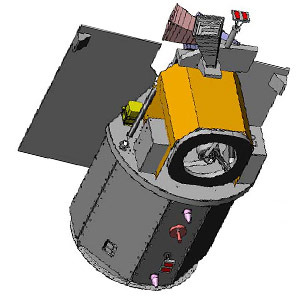 NSPO started FORMOSAT 5, the first Remote Sensing Program, for the Second Phase Space Program (2004~2018). The program emphasizes on building up the capabilities for independent development of spacecraft and payload instruments. Being the prime contractor for the Formosat-5 system, NSPO takes the sole responsibility of all development phases.

The strategy for the program is to acquire key technology and setup a heritage bus design for NSPO. The key technology to be developed by NSPO includes flight software, EGSE and IPS. Additionally, NSPO and domestic partners will jointly develop some other key components, such as CDMU and PCDU. In the meantime, another goal for the Formosat-5 is to build-up the capability for the high-resolution optical remote sensing instrument by integrating NSPO with the ITRC (Instrument Technology Research Center) of NARL.

The objectives of the mission are as follows:

Formosat-5 has an optical payload and a number of science payloads. The optical payload, Remote Sensing Instrument (RSI), will be jointly developed by ITRC and NSPO under support of domestic contractors. Its strategy is to establish capabilities of system design, integration & test, opto-mechanical system calibration and developing key component development for the RSI at the first stage so that the goal of self-reliant RSI can be accomplished at the next program. (Resolution: (1) Pan 2 m, (2) MS 4 m, Swath: 24 km)

FORMOSAT-5 was first contracted to be launched on a SpaceX Falcon-1e rocket. When the development of this rocket was cancelled, SpaceX moved them on a Falcon-9 v1.2.