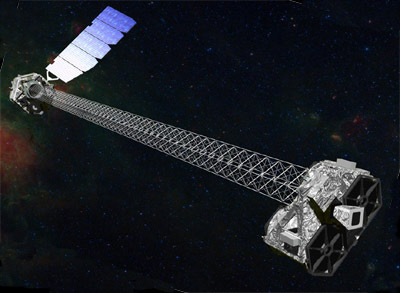 NuSTAR (Nuclear Spectroscopic Telescope Array) is a X-ray survey mission, which is first satellite to fly a focussing X-ray telescope in space for energies in the 8-80 keV.range.

NuSTAR is a pointed telescope, which was launched by a Pegasus-XL into a low-Earth, equatorial orbit from Kwajalein. The planned mission will last for three years, although less than half that time is required to meet the core science goals. NuSTAR will ordinarily follow a preprogrammed observation plan, but will have the capability of responding to transient opportunities within a day of notification.

The long focal length requires the use of a 10 m extendable mast. The design chosen is produced by Able Engineering, and is a straightforward reduction of the 60 m mast successfully deployed for the SRTM program. A laser metrology system monitors the mast alignment.

A decision on proceeding to flight development with NuSTAR was to be made by early 2006 for a launch in 2008, but it was cancelled in February 2006. In September 2007 NASA restarted the program for a planned launch in early 2012.

The spacecraft was originally to be based on the Spectrum Astro SA-200S bus, but after the restart of the program Orbital was selected to provide a LEOStar-2 based bus. During development, the number of X-ray telescopes in the array was reduced from three to two.