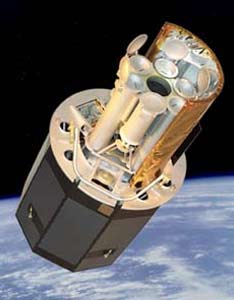 SPIDR (Spectroscopy and Photometry of the Intergalactic Medium's Diffuse Radiation) was to measure the amount of hot (105 to 106 Kelvin) gas found between galaxies in what is referred to as the inter galactic medium (IGM).

The spectrum and intensity of the gases (primarily five times ionized Oxygen and four times ionized Carbon) were to be analyzed and the gathered data can be used to tell us how far away the gas is, and how much of it there is. With this information maps of the filamentary structure of the cosmic web can be made and used to shed light on many of the problems in cosmology and astronomy including the question of how much of the unobserved dark matter lay in this form of hot gas.

SPIDR was to be launched into LEO by a Pegasus-XL rocket and to raise its orbit with it own Star-26C kick motor.

SPIDR was cancelled in early July 2003 due to concerns about the sensitivity of the instruments.