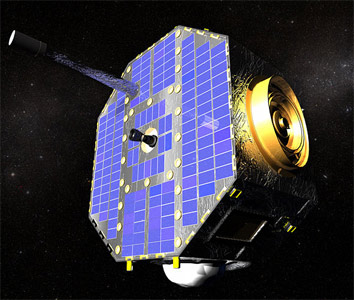 The IBEX (Interstellar Boundary Explorer) is a mission in NASA's SMEX (Small Explorer) program and has the sole objective of discovering the global interaction between the solar wind and the interstellar medium.

IBEX achieves this objective by globally imaging Energetic Neutral Atoms (ENAs) that are produced by plasmas beyond the Termination Shock, the closest of the inferred interstellar boundaries at the outer edges of our heliosphere. These groundbreaking, high sensitivity ENA observations are achieved with minimal risk using two very large aperture ENA cameras on a simple sun-pointed, spinning spacecraft. It uses two ENA imagers, one for high energy (IBEX-Hi) and one for low energy particles (IBEX-Lo), and orbits the earth beyond the magnetosphere to allow it to detect and map out the distribution of energetic particles that are created in the shock region between the solar wind and the interstellar medium, and eventually reach the vicinity of the Earth.

IBEX was boosted by a Pegasus-XL with an additional Star-27H (TE-M-1157) solid motor fourth stage to a an orbit with an apogee of around 320000 km, and then used onboard hydrazine propulsion to raise the perigee to 7000 km.

The nominal mission baseline duration was two years to observe the entire solar system boundary. This was completed by 2011 and its mission was extended to 2013 to continue observations.

In June 2011, IBEX concluded a maneuver that placed it into a new orbital configuration, represented by the image to the left. The farthest point of IBEXs orbit is still around 200,000 miles (320,000 kilometers) from Earth. The closest point of IBEXs orbit is now about 48,000 kilometers from Earth, above the harsh environment of Earths radiation belts. IBEX completes one of these orbital "lobes" in 9.1 days, and completes three orbits every 27.3 days, which is the same amount of time for the Moon to orbit Earth once. The benefit of this new orbit is that the spacecrafts orbit is incredibly stable and is not affected by the Moons gravitational pull, as it was to a large extent prior to the maneuver.