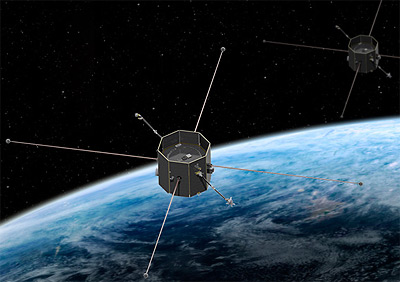 TRACERS (Tandem Reconnection and Cusp Electrodynamics Reconnaissance Satellites) is mission in NASA's Small Explorer program (SMEX), which will observe particles and fields at the Earths northern magnetic cusp region  the region encircling Earths pole, where our planets magnetic field lines curve down toward Earth. Here, the field lines guide particles from the boundary between Earths magnetic field and interplanetary space down into the atmosphere.

In the cusp area, with its easy access to our boundary with interplanetary space, TRACERS will study how magnetic fields around Earth interact with those from the Sun. In a process known as magnetic reconnection, the field lines explosively reconfigure, sending particles out at speeds that can approach the speed of light. Some of these particles will be guided by the Earths field into the region where TRACERS can observe them.

Magnetic reconnection drives energetic events all over the universe, including coronal mass ejections and solar flares on the Sun. It also allows particles from the solar wind to push into near-Earth space, driving space weather there. TRACERS will be the first space mission to explore this process in the cusp with two spacecraft, providing observations of how processes change over both space and time. The cusp vantage point also permits simultaneous observations of reconnection throughout near-Earth space. Thus, it can provide important context for NASAs Magnetospheric Multiscale mission, which gathers detailed, high-speed observations as it flies through single reconnection events at a time.

The TRACERS investigation was partially selected as a NASA-launched rideshare mission, meaning it will be launched as a secondary payload with PUNCH. NASAs Science Mission Directorate is emphasizing secondary payload missions as a way to obtain greater science return.