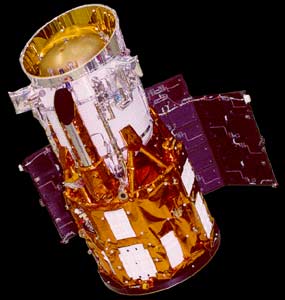 WIRE (Wide Field Infra Red Explorer) was a mission to survey the celestial sky in the infrared bands, which was part of NASA's small Explorer (SMEX) program.

The WIRE instrument consisted of a 30-centimeter aperture Cassegrain telescope with no moving parts and a field of view about the size of the full moon. The telescope was provided by Utah State University's Space Dynamic Laboratory and was enclosed within a two-stage, solid-hydrogen cryostat designed and manufactured by Lockheed-Martin Advanced Technology Center. The WIRE cryostat used the sublimation of frozen hydrogen to cool the telescope. The telescope mirrors were cooled to less than 13 Kelvin (K) and the focal plane arrays were cooled to less than 7 K using only 4.5 kilograms of solid hydrogen.

Shortly after launch WIRE ran into serious trouble. The cover of the solid hydrogen telescope ejected prematurely, and the cryogenic coolant evaporated, leaving the main instrument without cooling, rendering it useless.

Spacecraft operations have been redirected to use the onboard star tracker for long-term monitoring of bright stars in support of two separate science programs: astroseismology and planet-finding. The astroseismology program is intended to measure oscillations in nearby stars to probe their structure. The planet-finding program searches for stellar occultations by large planetary bodies as they pass through WIRE's line-of-sight to its target star.