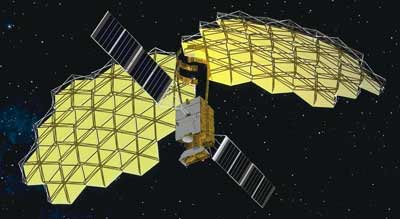 ETS-VIII (Engineering Test Satellite) is to be launched in 2006, with the main purpose of dealing with the increasing demand for digital communications, such as mobile phones and other mobile devices. The satellite, with a gross weight of around three tons and a diameter of 40 meters, has two Large Deployable Antenna Reflectors (LDAR) and two Solar Array paddles. One LDAR, about the size of a tennis court, is one of the world's largest geostationary satellites. Its size will enable direct communications with a geostationary satellite that covers all of Japan, making mobile communications more reliable. Currently under development are Large Deployable Antenna Reflectors with metal-mesh, high-power transponders and on-board processors. The technologies used in the development of these LDARs will be applicable to other large space structures. A subscale test of the LDARs was flown as the LDREX experiment.

The mission of ETS-VIII is not only to improve the environment for mobile-phone-based communications, but also to contribute to the development of technologies for a satellite-based multimedia broadcasting system for mobile devices. It will play an important role in the provision of services and information, such as the transmission of CD-quality audio and video; more reliable voice and data communications; global positioning of and broadcasting to moving objects such as cars; faster disaster relief, etc. Experiments in the fundamental technology for satellite-positioning, using a high-precision clock system, will be conducted between ETS-VIII and GPS, through the reception of signals transmitted from the clock.