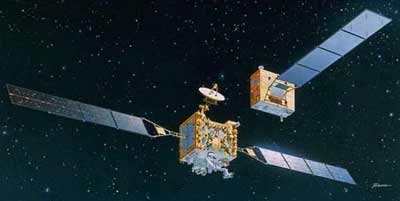 ETS-VII (Engineering Test Satellite, "Kiku 7") was launched aboard the H-2 No. 6 rocket from Tanegashima Space Center in November 1997.

"Orihime" is a target satellite weighing approximately 400 kilograms. It is placed in a fixed circular orbit at an altitude of roughly 550 kilometers.

"Hikoboshi" is a chaser satellite, weighing some 2.5 tons. It moves in a variable orbit to rendezvous and dock with "Orihime". "Hikoboshi" is equipped with a six-jointed, three-clawed robot arm two meters long.

Following launch of the "Orihime - Hikoboshi" satellite pair, a malfunction in the spacecraft attitude control system occurred, as well as a drop in output of the high gain antenna communication link necessary for satellite remote control. Nevertheless, the first rendezvous and docking experiment was successfully accomplished on July 7, 1998.