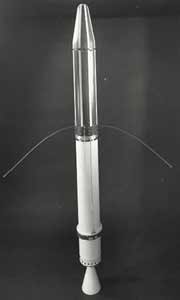 Explorer 1 was the first successfully launched U. S. spacecraft. Launched late on 31 January 1958 (10:48 p.m. EST, or 03:48 UTC on 01 February) on an Juno-1 rocket (adapted Jupiter-C), Explorer 1 carried instrumentation for the study of cosmic rays, micrometeorites, and for monitoring of the satellite's temperature.

The Juno-1 launch vehicle consisted of four propulsive stages. The first stage was an upgraded Redstone liquid-fueled rocket. The second, third, and fourth stage rockets consisted of eleven, three, and one (respectively) Baby-Sergeant motors. The satellite itself was the fourth stage of the Juno-1 rocket. It was cylindrical, 2.03 m long and 0.152 m in diameter. Four whip antennas were mounted symmetrically about the mid-section of the rocket. The spacecraft was spin stabilized.

The 4.82 kg instrumentation package was mounted inside of the forward section of the rocket body. A single Geiger-Mueller detector was used for the detection of cosmic rays. Micrometeorite detection was accomplished using both a wire grid (arrayed around the aft section of the rocket body) and an acoustic detector (placed in contact with the midsection). Data from the instruments were transmitted continuously, but acquisition was limited to those times when the spacecraft passed over appropriately equipped ground receiving stations. Assembly of data proceeded slowly also due to the fact that the satellite's spin-stabilized attitude transitioned into a minimum kinetic energy state, that of a flat spin about its transverse axis. This was deduced from the modulation of the received signal, which produced periodic fade-outs of the signal.

Explorer 1 was the first spacecraft to successfully detect the durably trapped radiation in the Earth's magnetosphere, dubbed the Van Allen Radiation Belt (after the principal investigator of the cosmic ray experiment on Explorer 1, James A. Van Allen). Later missions (in both the Explorer and Pioneer series) were to expand on the knowledge and extent of these zones of radiation and were the foundation of modern magnetospheric studies.

Explorer 2 was similar to Explorer 1. It failed to reach orbit, when the fourth stage failed to fire.

Explorer 3 was launched in conjunction with the IGY by the U.S. Army (Ordinance) into an eccentric orbit. The objective of this spacecraft was a continuation of experiments started with Explorer 1. The payload consisted of a cosmic ray counter (a Geiger-Mueller tube), and a micrometeorite detector (erotion gauge). The Explorer 3 spacecraft was spin stabilized and had an on-board tape recorder to provide a complete radiation history for each orbit. It was discovered soon after launch that the satellite was in a tumbling motion with a period of about 7 s. Explorer 3 decayed from orbit on June 27, 1958, after 93 days of operation.

Explorer 4 was a cylindrically shaped satellite instrumented to make the first detailed measurements of charged particles (protons and electrons) trapped in the terrestrial radiation belts. An unexpected tumble motion of the satellite made the interpretation of the detector data very difficult. The low-power transmitter and the plastic scintillator detector failed 3 September 1958. The two Geiger-Mueller tubes and the cesium iodide crystal detectors continued to operate normally until September 19, 1958. The high-power transmitter ceased sending signals on 5 October 1958. It is believed that exhaustion of the power batteries caused these failures. The spacecraft decayed from orbit after 454 days on 23 October 1959.

Explorer 5, similar in construction to Explorer 4, failed to reach orbit, when the first stage of the launch vehicle collided with the upper stages causing stage 2 to fire in the wrong direction.