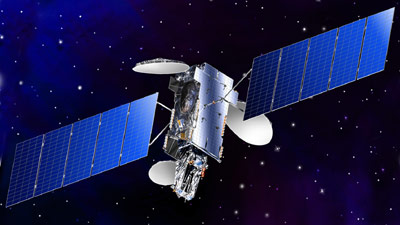 AMC-14 is a BSS satellite also built by Lockheed Martin with 32 (24 MHz) Ku-band transponders each supported by a 150 Watt TWTA; the spacecraft features the highest levels of redundancy on core components such as amplifiers, receivers, commanding beam and computer control systems. The satellite was to provide Direct to Home services in the United States from a slot to be determined. AMC-14 was to be the first BSS satellite operated in SES AMERICOM's domestic fleet.

EchoStar, which had a contract to lease the whole capacity of AMC 14, asked that the satellite's payload be modified to make it more flexible, and notably that it be capable of operating at least temporarily from Mexico's 77 degrees west longitude orbital slot. Due to the modifications, the satellite was not be launched before 2008.

The satellite was launched on 14. March 2008, but due to a launch vehicle failure was left stranded in a too low transfer orbit. After evaluations, if the satellite could be maneuvered to GEO on its own, it was decided, that there was no viable way to put AMC 14 into geostationary orbit. SES Americom declared the satellite a complete loss. The satellite was then sold to the US Department of Defense and began maneuvering itself to a higher orbit. In late January 2009 it has finally reached geosynchronous orbit using its on-board thrusters. It is currently located at around 35 degrees East, with an inclination of more than 13 degrees.