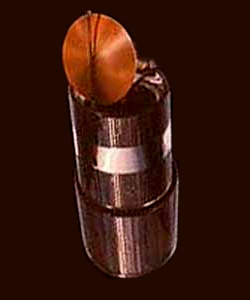 When Western Union returned to Hughes Aircraft Company in 1980 for a second generation of Westar satellites, it selected spacecraft having twice the capacity of their predecessors.

Westars 4 and 5 were launched on McDonnell Douglas Delta boosters from Cape Canaveral, Fla., on 25 February 1982, and 8 June 1982, respectively. Each was propelled into an elliptical transfer orbit by a McDonnell Douglas payload assist module (PAM-D), and placed into near-synchronous orbit by a Thiokol Star-30B solid propellant apogee motor. The satellites drifted into final orbit and were placed in operational position through the use of the same onboard propulsion system that provides stationkeeping.

Westar 6 was launched from the space shuttle in February 1984. Its PAM-D misfired, however, and the satellite was stranded in a useless low orbit. It was retrieved by shuttle astronauts in November 1984, and Hughes was contracted to refurbish it. Westar 6 was eventually sold to the AsiaSat consortium and renamed AsiaSat 1. The spacecraft was successfully relaunched on 7 April 1990, on board a Chinese CZ-3 rocket, and now provides telecommunications services to a number of Asian nations.

The Westar system was designed to provide continuous video, facsimile, data, and voice communications service throughout the continental United States, Alaska, Hawaii, Puerto Rico, and the Virgin Islands. In early 1989, Hughes subsidiary Hughes Communications, Inc., (HCI) purchased Westar III, IV, and V from Western Union, doubling the size of the HCI C-band satellite fleet. Telemetry, tracking, and control of these and the other HCI satellites is managed by Hughes facilities in Spring Creek, N.Y., and in Fillmore and El Segundo, Calif.

The HS-376 series of spacecraft uses two telescoping cylindrical solar panels and a folding antenna for compactness during launch. Once the satellite is in synchronous orbit 22,300 miles above the equator, the antenna is erected and the outer solar panel extended, more than doubling the spacecraft's height and power output.

The spacecraft are 7.2 feet wide. They are 9 feet high in the stowed position, and with the 6-foot wide antenna erect and the aft solar panel deployed, they stand 21.6 feet high. Each weighs 1280 pounds at beginning of life in orbit. Stationkeeping is provided by four thrusters using 313 pounds of hydrazine propellant. The K-7 solar cells generate 935 Watts at beginning of life, and two nickel-cadmium batteries furnish full power during an eclipse.

The transmit and receive beams are created by a shared aperture grid antenna with two polarization-selective surfaces. The front surface is sensitive to horizontally polarized beams, and the rear surface is sensitive to vertically polarized beams. Separate microwave feed networks are used for the two polarizations. The satellites operate in the C-band, with receive from 5.925 GHz to 6.425 GHz and transmit from 3.7 GHz to 4.2 GHz. The effective isotropic radiated power over the 36 MHz bandwidth ranges from a minimum of 34 dBW in the contiguous United States to 27.2 dBW in Puerto Rico. Westar IV, V, and VI use 7.5 watt traveling wave tube amplifiers.

The satellites are stabilized by spinning at 50 rpm. Both the communications antenna and electronics are despun with respect to the earth and achieve a pointing accuracy of better than 0.05 degrees. In synchronous orbit, the satellite's velocity maintains it in a fixed position relative to the earth, thereby ensuring continuity of communications services.