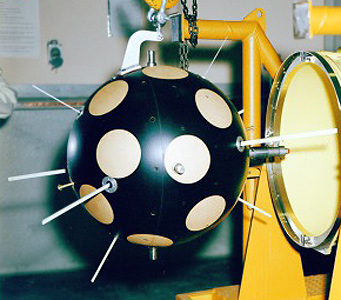 The whole, unique concept of the Cannon Ball satellites was to have as large a mass/area ratio as possible so that they could stay in orbit at lower altitudes than conventional satellites and thus measure atmospheric properties in the lower thermosphere, a region of the atmosphere whose variability is largely unknown. Thus CannonBall I was made very small, with a diameter of only 24 inches, but a total weight of 600 lb due primarily to a 1.5 inch thick shell of brass. Measurements were made with drag accelerations in the range 5×10-5 g to 1×10-7 g. In principle, accelerations could be measured down to 10-8 g (or lower) but, in practice, the lower limit of useful data is set by data noise, imperfect location of the accelerometers, and vehicle rotation.

The longer retractable antennas are for the telemetry, the two small antennas are for the radar tracking beacon, and the small cylindrical rods are for mounting. The thermal condition of the satellite was of some concern due to heating by sunlight and by atmospheric heating when orbiting at low altitude. Thus it was decided to paint the sphere black (to increase radiation) with some gold-plated circular areas. The key instrument consists of three mutually perpendicular linear Miniature Electrostatic Accelerometers (MESA) developed by the Bell Aerospace Corporation, Buffalo, NY. The proof mass is centered radially and longitudinally by electric fields. The required strength of the longitudinal field is a measure of the acceleration component in that direction.

The Cannonball 1 satellite, with an initial perigee of 150 km, remained in orbit for 39 days. Near the end of its life, measurements were made at a record low altitude of 120 km.

An improved version, LOADS 2 (Cannonball 2), was launched as a follow-up experiment.