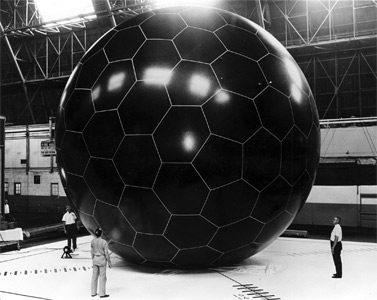 PasComSat (Passive Communications satellite) was an inflatable gridsphere launched on an OV1 propulsion module. A gridsphere is a balloon consisting of wire mesh embedded in a photolyzable balloon. After inflation in space, the UV radiation causes the balloon to vaporize, leaving a wire frame in spherical shape. This gridsphere reflects radio waves as good as a aluminized balloon, but has much less atmospherical drag compared to a balloons satellite.

To reduce the effects of solar pressure and space drag, the USAF contracted with the Goodyear Aerospace Corp. for construction of a 30-foot diameter grid-sphere balloon. It was made of a soft aluminum wire grid imbedded in a special plastic designed to dissolve in space under the sun's strong ultraviolet rays. On 14 July 1966, the USAF grid-sphere payload was launched from Vandenberg Air Force Base, Calif., atop an Atlas booster. It went into orbit 620 miles above the earth and was automatically inflated with helium. The plastic covering soon dissolved, leaving a 30-foot diameter open aluminum structure orbiting the earth. Tests indicated that the satellite would remain in orbit for at least 11 years and that it had a reflective power five times greater than that of a solid sphere.