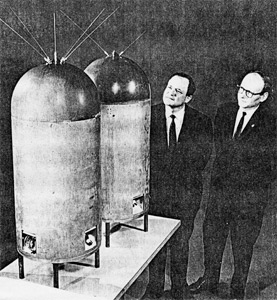 The OV4 1R and OV4 1T (Orbiting Vehicle 4) satellites were an experiment to test the feasibility of using the ionosphere's F-layer as a wave guidance for HF and VHF transmissions between satellites out of line of sight of each other ("Whispering Gallery").

The 109 kg OV-1T (Transmitter) carried transmitters operating at 20 MHz, 34 MHz and 46 MHz and incorporated a small rocket motor to ensure separation from OV4-1R.

A second set of OV4-"Whispering Gallery" satellites was to be launched in 1967 as OV4-2R and OV4-2T but the programme had been cancelled along with the cancellation of the MOL programme.