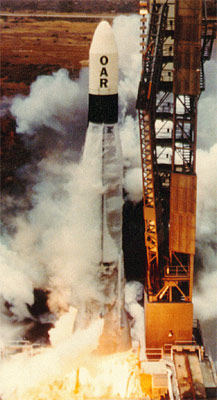 The Atlas-E/F OV1 was unique system to launch small research satellites, where each satellite had its own independent OV1 upper stage. It replaced the Atlas-D OV1 combination.

When the Atlas-D first stage was replaced with surplus Atlas-F boosters, the original OV1 launch enclosure was also discarded and replaced by a payload adaptor inherited from the Atlas-E/-F Trident used in the RMP-B reentry test program and a new 2.13 m diameter payload fairing with lenght of 4.94 m built by General Dynamics. This shrowd allowed the accomodation of two or three OV1 propulsion modules side-by-side and also allowed more voluminous payloads.

Four of these vehicles were flown, all successful.