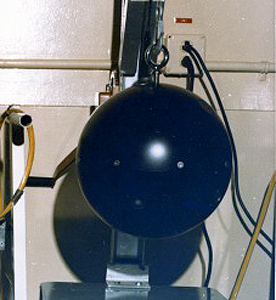 The spacecraft was a 30-cm-diameter brass sphere with a 2.5 cm wall thickness. Mounted on the surface were two beacon antennas, spaced 180 deg apart, for a C-band transponder. Internal electronics consisted of the transponder and a silver-cadmium battery pack. The battery, with an expected 12-day lifetime, was the sole source of power for the spacecraft. The spacecraft employed an automatic timing device to turn on the transponder for periodic interrogation.

The satellite, which was successfully launched into a polar orbit as part of the payload of OV1 21, performed normally until it reentered the earth's atmosphere on 19 September 1971.