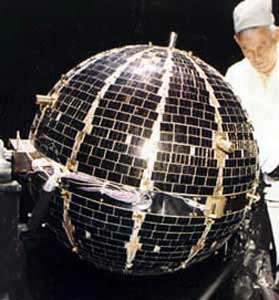 LOADS 2 (Low Altitude Density Satellite 2), a.k.a Cannonball 2, was a high-density satellite designed to obtain density data at very low altitudes (100 km). It was a larger and heavier version of LOADS 1 (OV1 16, Cannonball 1) and featured solar cells for alonger lifetime.

A specially developed accelerometer mounted at the center of this spherical satellite was used to measure satellite accelerations from which density was calculated. Determinations of density vs latitude, season, time of day, solar flux, and magnetic activity were made. A 136.53 MHz transmitting beacon was also mounted on the spacecraft to permit accurate tracking from the ground. Thus, density was also calculated from careful ground observations of satellite positions, and the results of these calculations were compared with the onboard measurements. The spacecraft was a 65 cm hollow sphere with a 7.5 cm thick wall. The outer surface of the sphere was entirely covered with 4800 solar cells except for a 5-cm-wide band at the equator that was used for antennas and a small clear area used for support pins. Four steel tape antennas for VHF telemetry, tracking, and command systems, two turnstile antennas for a c-band transponder, two aspect sensors, and four mounting pins protruded from the 5-cm band. The spacecraft telemetry system could be commanded in either a real-time of a recorder playback mode or in a combination of these two modes. The tape recorder, having an 18-to-1 playback-to-record ratio, could be commanded to continuously record 90 min (approximately one orbit) of data or to record 30 min of data near perigee for each of three consecutive orbits.