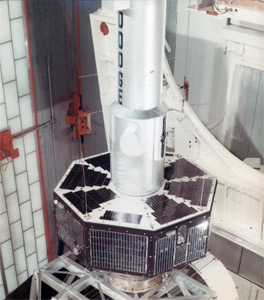 The DODGE (Department of Defense Gravity Experiment) satellite was orbited primarily to study a number of advanced biaxial and triaxial gravity-gradient stabilization techniques at near-synchronous altitudes. Secondary objectives included obtaining measurements of the earth's magnetic field at near-synchronous altitudes and black-and-white and color TV photography of the entire earth disk.

The satellite was in the form of an octagonal aluminum shell with a truncated pyramid at the top and a 25.4 cm-diameter cylindrical mast extending 1.57 m from the satellite base. The satellite body was 2.41 m long and 1.22 m in diameter. A total of 10 knobbed booms were carried on board. Upon radio command, these booms could be independently extended or retracted along three axes to various limits out to 45.75 m. The cylindrical mast housed a 4.6 m boom that extended through the end of the mast, two 15.25 m long damper booms that extended in the x-y plane, and triaxial vector magnetometer sensors. The remaining seven booms were contained in the satellite body along with a two-camera (one color and one black-and-white) vidicon camera system. The command system consisted of a dual command receiver, dual command logic, and power switching circuitry. The telemetry system included two directional antennas mounted on the mast, two 38-channel commutators for housekeeping data, and a dual transmitter system that transmitted analog data at a frequency of 240 MHz and TV data at 136.8 MHz.

The satellite was successfully stabilized 12 days after launch by means of the gravity-gradient booms and libration dampening systems. It was oriented with its base and mast directed toward the center of the earth's disk. The mission was a success and proved the feasibility of achieving triaxial gravity-gradient stabilization at synchronous altitudes using passive and semipassive techniques. The satellite operated for over 3 years and took thousands of black-and-white and color pictures of the earth. Early in 1971, problems with the batteries on board limited operation to only solar acquisition periods. The satellite was placed in an operational off mode in early 1971.