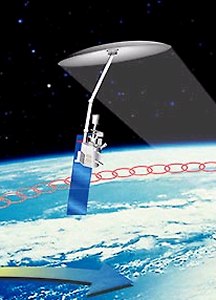 The Hydros (Hydrosphere State) Mission will use a combined passive/active low-frequency (L-band) microwave instrument to measure the land hydrosphere state globally from space. Hydros will provide measurements of surface soil moisture (0–5 cm depth) and land freeze/thaw over a wide 1000 km swath with a global revisit of two to three days (one to two days above 50 latitude). Over 70% of the swath the radar resolution is better than 3 km. The radiometer resolution is about 40 km. Measurements from these sensors are combined to produce a global 10 km soil moisture data product.

The radar and the radiometer share the aperture of a large (6 m) but lightweight deployable mesh reflector. The reflector rotates to make conical scans over a wide swath (1000 km). In this way. Hydros will produce global mapping with high revisit.

Hydros was selected as an alternate Earth System Science Pathfinder (ESSP) mission in 2002. After a year of the Risk Mitigation phase, the Hydros mission was approved to proceed to Formulation Phase in 2003, with a planned launch date of September 2010. In December 2005, NASA notified the Hydros project that Hydros would not be funded to completion due to agency budgetary constraints. The Hydros team was encouraged to propose again to future NASA competitive solicitations due to the outstanding progress accomplished by the team. The mission was resurrected in 2008 in a modified version as SMAP.