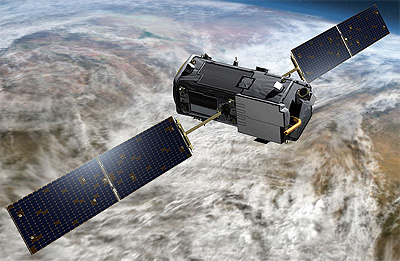 The Observatory carries a single instrument that incorporates three classical grating spectrometers. Each spectrometer detects the intensity of radiation within a very specific narrow band at Near Infrared (NIR) wavelengths. The three spectrometers share a common structure, a cryogenic cooler, and an input telescope. The telescope consists of an 11 cm aperture, as well as a primary and a secondary mirror. The relay optics assembly includes a fold mirrors, dichromic beam splitters, band isolation filters and re-imaging mirrors. Each spectrometer consists of a slit, a two-lens collimator, a grating, and a two-lens camera. Each of the three spectrometers has an essentially identical layout. Minor differences among the spectrometers, such as the coatings, the lenses and the gratings, account for the different bandpasses that are characteristic of each channel. The focal ratios of the instrument optics range from f/1.6 to f/1.9. To implement an optically fast, high-spectral-resolution measurement system, the OCO instrument combines refractive and reflective optical techniques. Since the light in the common telescope and relay optics assembly has not yet been separated into the three distinct wavelength bands, these instrument subsystems primarily use reflective optics. On the other hand, the extremely narrow channel bandpasses make potential chromatic aberrations in the spectrometers negligible, which enables the use of refractive optics.

The OCO satellite was lost during launch as the payload fairing did not jettison.

The replacement OCO-2 will be based on OCO to the extent possible. OCO-2 will be a dedicated spacecraft that carries a single instrument comprised of three high resolution grating spectrometers. The spacecraft will also be based upon the LeoStar-2 architecture. For OCO-2, also a Taurus-3110 launch vehicle has been selected, but has been dropped since, as NASA demands a recertification after another launch failure.

NASA plans to develop and assemble spare materials from the successful development and launch of the OCO-2 in 2014 and host the OCO-3 instrument on the International Space Station or another space-based platform.