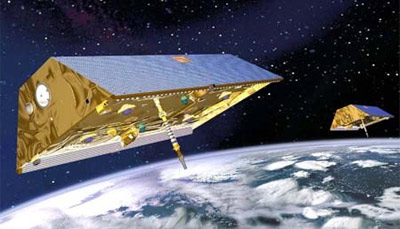 The primary goal of the GRACE (Gravity Recovery And Climate Experiment) mission is to accurately map variations in the Earth's gravity field over its 5-year lifetime.

The GRACE mission consists two identical spacecrafts flying about 220 kilometers apart in a polar orbit 500 kilometers above the Earth. It maps the Earth's gravity fields by making accurate measurements of the distance between the two satellites, using geodetic quality Global Positioning System (GPS) receivers and a microwave ranging system. This provides scientists from all over the world with an efficient and cost-effective way to map the Earth's gravity fields with unprecedented accuracy. The results from this mission yield crucial information about the distribution and flow of mass within the Earth and its surroundings.

The gravity variations that GRACE studies include: changes due to surface and deep currents in the ocean; runoff and ground water storage on land masses; exchanges between ice sheets or glaciers and the oceans; and variations of mass within the Earth. Another goal of the mission is to create a better profile of the Earth's atmosphere. The results from GRACE make a huge contribution to NASA's Earth science goals, Earth Observation System (EOS) and global climate change studies.

GRACE is a joint partnership between the NASA in the United States and Deutsche Forschungsanstalt fur Luft und Raumfahrt (DLR) in Germany. Dr. Byron Tapley of The University of Texas Center for Space Research (UTCSR) is the Principal Investigator (PI), and Dr. Christoph Reigber of the GeoForschungsZentrum (GFZ) Potsdam is the Co-Principal Investigator (Co-PI). Project management and systems engineering activities are carried out by the Jet Propulsion Laboratory.

Due to problems with its battery, GRACE-2 ended its mission in October 2017, thus ending the common GRACE mission. GRACE-1 will be retained operational for calibration measurements until reentry in early 2018.

As a follow-on mission, NASA and GFZ are preparing the GRACE-FO mission for a launch in 2018.