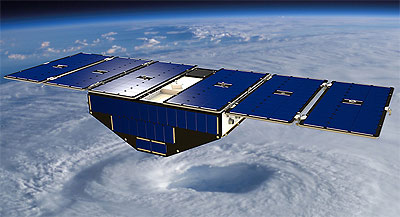 The mission will use a constellation of small satellites that will be carried to orbit on a single launch vehicle. The CYGNSS data will enable scientists, for the first time, to probe key air-sea interaction processes that take place near the inner core of the storms, which are rapidly changing and play large roles in the genesis and intensification of hurricanes. The CYGNSS measurements also may provide information to the hurricane forecast community.

Once in orbit, CYGNSS's eight micro-satellite observatories will receive both direct and reflected signals from Global Positioning System (GPS) satellites. The direct signals pinpoint CYGNSS observatory positions, while the reflected signals respond to ocean surface roughness, from which wind speed is retrieved.

It is the second award, and first award for space-based investigations, in the Earth Venture-class series of rapidly developed, cost-constrained projects for NASA's Earth Science Division. The award will be funded during the next five years for $151.7 million. The cost includes initial development, launch, deployment and data analysis.

The CYGNSS constellation is baselined for a Pegasus-XL launch. Athena-1c was also considered. In March 2014, a Pegasus-XL was selected.