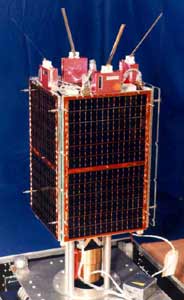 FASat (Fuerza Aéra de Chile Satellite)-Alfa was to become the first Chilean satellite, and has been constructed under a Technology Transfer Program between the Chilean Air Force (FACH) and Surrey Satellite Technology Ltd (SSTL) of the United Kingdom. The primary goal of the Program is to obtain for Chile the basic scientific and technological experience required to continue with more advanced steps. The purposes of the FASat-Alfa mission are to create a group of engineers with aerospace experience, to have the first Chilean satellite in orbit, and to install and operate the Mission Control Station (ECM-Santiago) in Chile.

TheFASat-Alfa satellite uses the modular UoSAT bus, proved in ten previous missions. The satellite has been constructed at SSTL by a combined group of engineers from FACH and SSTL. FASat-Alfa has been launched on 31st August 1995 as a secondary payload, and has a circular orbit of 650 kilometers at 82.5 inclination.

The main mission objectives of the Satellite are Ozone Layer monitoring with the so called Ozone Layer Monitoring Experiment (OLME), Remote sensing with the Experimental Imaging System (EIS), and Data Transfer using the Data Transfer Experiment (DTE). Other payloads include Advanced Digital Signal Processing, Orbital Positioning with GPS and a Transputer system. It is intended that the satellite will have educational value as well by transmitting telemetry data in the form of speech and low data rate signals to schools in Chile.

FASat Bravo was a copy of FASAT Alfa, which was ordered, when the first failed to separate from its parent satellite.