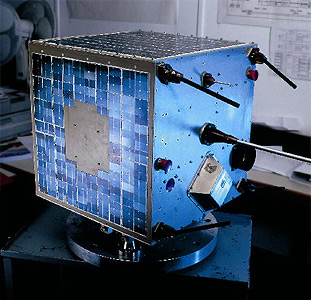 Techsat (Technology Satellite) or Gurwin were microsatellites built aby students of the Technion (Israel Institute of Technology) institute at Haifa.

The satellites were of cubic shape with a size of 445 mm × 445 mm × 445 mm. They were three-axis stabilized, using a momentum wheel and three magnetorquers as actuators, and a three-axis magnetometer as attitude sensor. They were powered by thin-film photovoltaic solar cells which were mounted on four sides of the six outer aluminum panels and provided 20 W. A NiCd battery is provided for eclipse operations. The fifth panel, pointing toward Earth, includes antennas, a retroreflector, a UV spectro radiometer (OM-2) and an imaging camera. When 3-axis stabilized, the satellite would have its sixth panel unlit; it is not exposed to the sun and therefore does not include any solar cells. The satellite featured a digital store and forward multi-user system, compatible with existing store and forward facilities already in use on microsatellites used by the international amateur radio electronic community. The satellite total mass was 48 kg, with the combined payload mass being 6.6 kg. The design life was one year.

Techsat 1 or Gurwin 1 was launched on 23 March 1995 on the ill-fated maiden flight of the Start booster and did not reach orbit.

The second satellite, Techsat 1B or Gurwin 1B, was successfully launched as a piggy-back payload on a Zenit-2 rocket. On orbit, it received the name Gurwin OSCAR 32 or GO 32. It remained operational for more than 11 years. In March 2010 the steadily deteriorating satellite solar panels have reached the point where they could no longer support the nominal performance of the satellite systems, which lead to the termination of the mission.