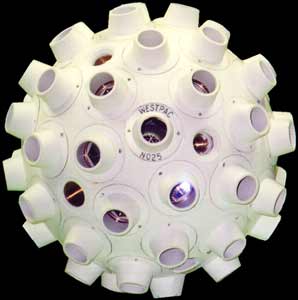 At the Western Pacific Laser Tracking Network (WPLTN) Executive meeting in Moscow on 2 December 1995, it was announced that Electro Optic Systems (EOS) had entered into a joint project with the Russian Space Agency (RSA) to construct and launch a new SLR satellite (WESTPAC-1, formely known as WPLTN-1) designed to overcome the limitations of all present targets in relation to millimeter geodesy. Initially, this satellite was referred to as WPLTN-1. It is currently designated WESTPAC-1 and very similar in design to GFZ-1.

Its main immediate purpose is to provide the best possible target for the WPLTN stations and, by implication, the Keystone Project constructed by Communications Research Laboratory (CRL) of the Japanese Ministry of Posts and Telecommunications.