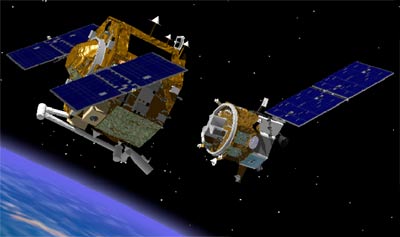 The ability to refuel, reconfigure and repair satellites has been considered a top priority by both the military and civilian space-launch and satellite industry for many years. A major step toward that goal was initiated in March 2002, when Boeing was selected by the Defense Advanced Research Projects Agency (DARPA) as the prime integrator to perform Phase II of the Orbital Express Advanced Technology Demonstration. Under a 42-month $113 million agreement with options, a Boeing Phantom Works team finalized the design, completed fabrication and demonstrated the various technologies required for autonomous satellite servicing while on-orbit.

The unique Orbital Express advanced technology demonstrator has the capability to safely and autonomously service and refuel satellites while onorbit. The Boeing team built the ASTRO (Autonomous Space Transport Robotic Operations satellite), and a surrogate next generation serviceable satellite, NEXTSat/CSC, and conducted an on orbit demonstration of autonomous satellite servicing. Launch took place in 2007, with routine, cost-effective, autonomous capability for re-supply and reconfiguration of on-orbit spacecraft planned for the post-2010 timeframe.