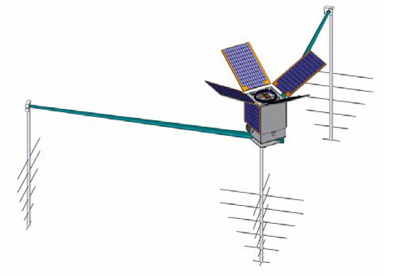 Los Alamos is building the CFESat (Cibola Flight Experiment Satellite), a reconfigurable processor payload intended for a low-Earth orbit system. It will survey portions of the VHF and UHF radio spectra. The experiment uses networks of reprogrammable, field programmable gate arrays (FPGAs) to process the received signals for ionospheric and lightning studies. The objective is to detect and measure impulsive events that occur in a complex background.

The experiment also will validate the on-orbit use of commercial, reconfigurable FPGA technology demonstrating several different schemes for the mitigation and correction of “single-event upsets” that would crash most current computer systems.

The DoD Space Test Program is responsible for the integration of seven satellites into a single payload stack and launch of the STP-1 mission. The STP-1 mission is scheduled for launch in 2006 on a medium-class Lockheed-Martin Atlas-5(401), an U.S. Air Force Evolved Expendable Launch Vehicle (EELV), using the EELV's Secondary Payload Adapter (ESPA) that allows small satellites to be launched as “piggyback” passengers with larger spacecraft.