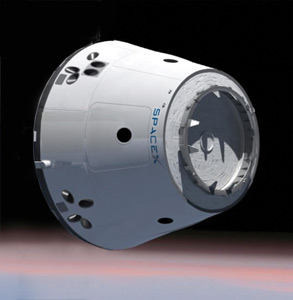 Dragon is a space capsule designed by SpaceX to provide supplies to the International space station.

The prototype Dragon C1 was a simplified test of the Dragon capsule. For the 4 hour test flight, this prototype lacked the solar arrays and the docking mechanism of the operational Dragon capsule. Contrary to the operational missions, the unpressurized trunk stayed connected to the Falcon-9 v1.0 upper stage and only the capsule itself separated from the launch vehicle.

After two revolutions, the capsule reentered and landed successfully off the west coast of Mexico. The capsule was later put on display at the SpaceX headquarters.