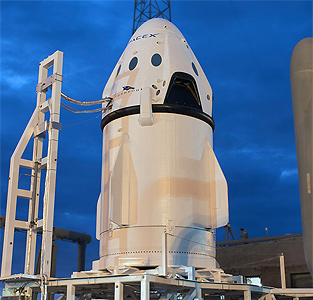 The Abort Test Vehicle lacks several crew support systems and does not feature the solar cells of the final Crew Dragon vehicle.

For the first test, the pad abort test, the Crew Dragon Abort Test Vehicle is launched from the launch pad at Cape Canaveral using a small cylindrical adaptor. The capsule is recovered and reused for the in-flight abort test.

The eight SuperDracos ignite simultaneously and reach maximum thrust, propelling the spacecraft off the pad. After half a second of vertical flight, Dragon pitches toward the ocean and continues its controlled burn. The SuperDraco engines throttle to control the trajectory based on real-time measurements from the vehicles sensors. The abort burn is terminated once all propellant is consumed and Dragon coasts for just over 15 seconds to its highest point about 1500 meters above the launch pad. The trunk is jettisoned and the spacecraft begins a slow rotation with its heat shield pointed toward the ground again. Small parachutes, called drogues, are deployed first during a 4-6 second window following trunk separation. Once the drogue parachutes stabilize the vehicle, three main parachutes deploy and further slow the spacecraft before splashdown. Dragon splashes down in the Atlantic Ocean about 2200 meters downrange of the launch pad. The entire test is less than two minutes long.

The vehicle apparently slightly underperformed, but landed safely in the ocean.

The in-flight abort test was originally to launched later in 2015 from Vandenberg using the refurbished capsule from the pad abort test and the Abort Test Booster, a Falcon-9 based vehicle with only three engines and no upper stage, which is modified from the second Falcon-9R-Dev landing test vehicle. In June 2015 it was decided to move the test after the uncrewed Crew Dragon DM-1 (Dragon C201) mission to have a higher fidelity version of the capsule. This test will be staged from Cape Canaveral's LC-39A pad using the refurbished capsule from the DM-1 flight (Dragon C201). The Dragon C201 capsule was destroyed on 21 April 2019 during a ground propulsion test, so the new Dragon C205 capsule will be used for the inflight abort test.