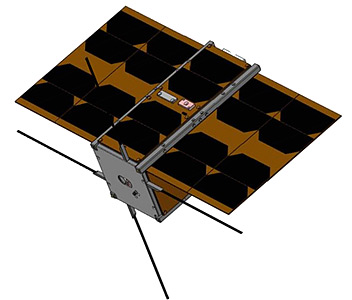 The AOBE-VELOX-4 mission is a joint Singaporean and Japanese nanosatellite mission by Nanyang Technological University, Singapore and the Kyushu Institute of Technology (Kyutech) to develop and orbit a 2U CubeSat in low Earths orbit (LEO) for technology demonstration and to observe Lunar Horizon Glow.

The satellite captures images of the horizon while passing from day side to night side and to capture Earth night view image via low-light camera. For observation of Lunar Horizon Glow, it needs to orient a camera toward the limb before sunrise or after sun-set. Attitude control and 2 axis stabilization is needed to orient a satellite toward the limb.

The CubeSat AOBA VELOX IV was launched into a 230 km perigee and 630 km apogee orbit with 97.4 deg. For its 1 year in orbit, AOBA VELOX IV logs telemetry data from its various subsystems, conduct some experiments and send the data down to the mission control center for analysis.