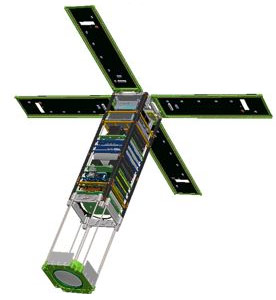 The VELOX-I mission is a Singaporean nanosatellite mission consisting of two satellites - VELOX-1 and the VELOX P3 subsatellite - to operate in sun synchronous Low Earths Orbit (LEO). The project is part of NTUs Undergraduate Satellite Program, which provides an opportunity for engineering students to participate in a multidisciplinary hands-on space project.

The objective of the mission is to provide hands-on experience on a space project for students and to conduct several technology demonstrations. The mission objectives are:

VELOX-1 is a 3U CubeSat, which deploys the VELOX P3 (P-Sat) subsatellite in orbit. NSAT features four deployable solar arrays and has a projected life time of 2 years. The payload consists of a imaging system with extended optics for 20 m ground resolution, a quantum physics payload and an intersatellite communications payload. VELOX P3 (P-Sat) will be only deployed at the end of the mission after extensive conjunction analysis to avoid potential collisions with other satellites.