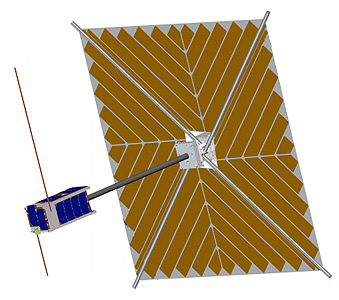 The OrigamiSat 1 (OrganizatIon of research Group on Advanced deployable Membrane structures for Innovative space science Satellite) is a 3U CubeSat designed at Tokyo Institute of Technology (TITech) to demonstrate an advanced membrane space structure in orbit.

The objectives of the OrigamiSat 1 missions are:

The Origamisat system consists of four major subsystems: bus, membrane deployment system, extendable camera system, and ground station. For the bus, most components are composed of commercial off-the-shelf (COTS) components. This design aims at facilitating the future space demonstration of advanced space deployable structures by university/company researchers. The membrane deployment system deploys a membraneboom integrated structure. Its membrane folding pattern, called rotationally skew folding, enables the attachment of thin-film devices on the membrane, such as thin-film solar cells and thin SMA antennas. The deployable camera system takes pictures of the deployed membrane on orbit. It has an approximately 1 m length deployable mast, and the camera is installed on the tip of the deployable mast.