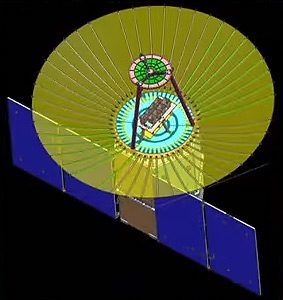 RISAT 2B, RISAT 2BR1 and RISAT 2BR2 (Radar Imaging Satellite) are satellite imaging missions of ISRO using an active SAR (Synthetic Aperture Radar) imager to provide continuity of service for RISAT-2. The objective of the RISAT mission is to use the all-weather as well as the day-and-night SAR observation capability in applications such as agriculture, forestry, soil moisture, geology, sea ice, coastal monitoring, object identification, and flood monitoring, but also for military surveillance.

The satellite have a mass of 615 kg and feature an X-band SAR (Synthetic Aperture Radar). They feature a larger bus than its RISAT-2 predecessor. The spacecraft is built around new hexagonal structure with a separate payload module. It carries the X-Band SAR with a radial rib reflector 3.6 m mesh antenna. Reportedly the radar system is again a version of the Israeli TECSAR 1 system. It is built for a 5 year operational lifetime. RISAT 2B was launched into a 37° inclined orbit at 555 km orbital height.

RISAT 2B, RISAT 2BR1 and RISAT 2BR2 will be launched in 2019 on Indian PSLV launch vehicles.

The last satellite, RISAT 2BR2, has been renamed EOS 01 before launch.