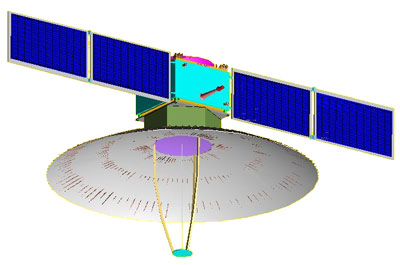 RISAT 2 (Radar Imaging Satellite 2) is a satellite imaging mission of ISRO using an active X-band SAR (Synthetic Aperture Radar) imager. The objective of the RISAT mission is to use the all-weather as well as the day-and-night SAR observation capability in applications such as agriculture, forestry, soil moisture, geology, sea ice, coastal monitoring, object identification, and flood monitoring, but also for military surveillance.

The RISAT 2 payload was purchased from Israel as the development of Indias indigenous RISAT 1 was delayed. The radar system is based on the Israeli TECSAR 1 satellite, while it is mounted on an indian satellite bus.

RISAT 2 was launched as the prime passenger on an indian PSLV-CA launch vehicle together with a small piggy-back satellite.

A much larger follow-on satellite with an Indian X-band SAR payload, RISAT 2A, is planned for 2020 to provide continuity of service. Also three RISAT 2B, 2BR1 and 2BR2 satellites are to be launched before RISAT 2A.