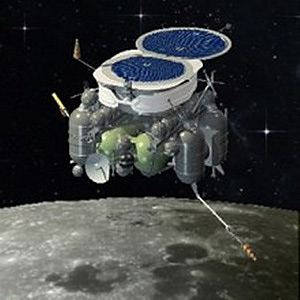 Ye-8LS was series of Soviet lunar orbiters. Two were launched, Luna 19 and Luna 21.

The Ye-8LS orbiters were created on the basis of the Ye-8 (Luna 17 type) lunar rovers. To reduce costs during its development, the structural units and assemblies of the Lunokhod rovers and the landing stage were used to the maximum. The ramps for the exit of the Lunokhod and the Doppler equipment were removed from the correcting-braking module (CT). The hinged compartments were made non-detachable. The Vega high-altitude radio altimeter was excluded from the control loop, but it was used to measure the altitude profile of the lunar surface-altimetry.

The lunar rover body without a chassis and a radioisotope generator was used as the instrument compartment. Due to the change in illumination conditions in orbit compared to the lunar surface, the radiator-cooler was moved from the upper bottom of the instrument compartment to the lateral surface. Additional solar cells were installed on the freed surface, resulting in the maximum power of the solar cells together with the main rotary panel was 240 watts. It also served as a radiator-heater.

To obtain images of the lunar surface, two optical-mechanical television cameras were installed on board the spacecraft, similar to the television cameras installed on the lunar rovers and KT landing platforms, but modified for orbital flight conditions. As a result of the refinement, scanning was carried out only in one plane perpendicular to the direction of the spacecraft movement (line scan). Scanning in another plane was carried out with the movement of the orbiter itself (frame scan). The scanning speed was 4 lines per second, and the line angle of view was increased to 185°.

The total mass of the orbiter after entering the selenocentric orbit was 4100 kg together with the CT module, and the entire orbital mision was performed together with this stage.