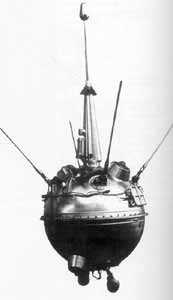 The Ye-1A series of soviet lunar probes were attempts to reach the surface of the moon. Two were launched, but only the second was successuful and was named Luna 2 (also called "Lunik 2" in western media). Luna 2 became the first human made object to reach the moon.

The Ye-1A series were improved versions of the Ye-1 series. The payload consisted of including scintillation counters, geiger counters, a magnetometer, Cherenkov detectors, and micrometeorite detectors. It also carried two sphere-shaped Soviet pennants, with the surface covered by identical pentagonal elements, which were to be shattered on impact.

The Ye-1A 5 probe was launched on 18 June 1959, but the mission failed due to a booster suffering a failure of the yaw gyro and veering off its flight path ending in flight termination after 153 seconds.

Luna 2 (Ye-1A 6) was successfully launched on 12 September 1959. On the way to the moon, it provided measurements of the Van Allen radiation belt. Luna 2 impacted the lunar surface as the first man-made object on 13 September 1959 after a flight of 1.5 days.