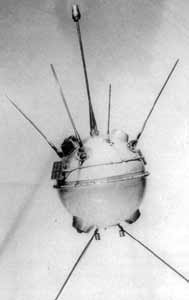 The Ye-1 series of soviet lunar probes were the first attempt to reach the surface of the moon. Only one of four probes was successfully launched, receiving the name Luna 1 (also called "Lunik 1" in western media), but missed the moon.

The 361 kg Ye-1 probes consisted of a spherical, pressurized container. Five antennae extended from one hemisphere, while instrument ports protruded from the surface of the sphere. The probes were battery powered and contained radio equipment, a tracking transmitter, a telemetry system, five different sets of scientific devices for studying interplanetary space (including a magnetometer, Geiger counter, scintillation counter, and micrometeorite detector), and other equipment.

During the flight to the moon, the upper stage of the launch vehicle released a 1 kg sodium cloud for tracking purposes.

At the end of their journey, the Ye-1 probes would crash into the Moon, delivering two metallic pennants with the Soviet coat of arms.

The first Ye-1 was launched on 23 September 1958, but the launch vehicle broke up 92 seconds into the flight due to longitudinal resonances in the boosters.

The second probe followed on 11 October 1958, failing after 102 seconds due to the same problem.

A third attempt was launched on 4 December 1958. This time 245 seconds into the flight, a hydrogen peroxide pump of the core stage seized up due to loss of lubrication, causing the destruction of the vehicle.

Finally the fourth Ye-1 was successfully launched on 2 January 1959. A malfunction in the ground-based control system caused an error in the rocket's burntime, and the spacecraft missed the target and flew by the Moon at a distance of 5900 km at the closest point. The probe was named Mechta, with the Luna 1 designation assigned retroactively.