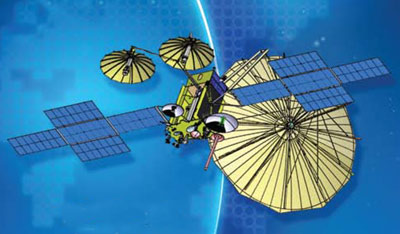 Yenisey A1 is an exprimental Russian geostationary satellite to evaluate new technologies, among them large diameter unfurlable antenna reflectors.

The pogram started under the name Luch 4, which was to be a russian follow-on relay satellite in the Luch series to supplement the Luch 5A and Luch 5B satellites. Later it was replaced in the relay function by the Luch 5V satellite and it was redesigned as a technology test mission to test several new technologies, including large-size, unfurlable antennas. In this new function, it was renamed Yenisey A1.

Yenisey A1 will be built on ISS Reshetnevs Ekspress-2000 bus. The 3000 kg spacecraft with a 13 year lifespan was to be launched in 2015. The status of this mission is unclear.